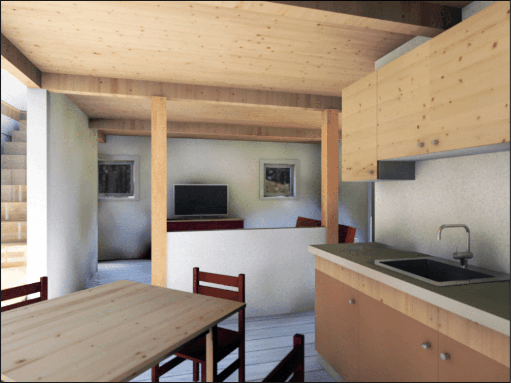 I've been working with John and Lisa lately renovating a structure on their property as a place for Lisa's mom and dad to come and live. While this project involves a historic barn, there is a trend toward accessory dwelling units (little buildings in the backyard) as living space for parents who need care or adult children looking to get an affordable start in life. Bringing new life to unused structures or adding on to the main house can make this possible and provide the desired opportunity for proximity and support. Everyone wins, right? The problem is, the governing bodies don't always think so.

The concern I've heard expressed in Connecticut is that these structures may later become rental units and bring down property values. Acceptance actually varies from one town to another and from one state to another. Western states like Washington and Oregon have lately tended to encourage greater density and have supported these units.

In my client's case, the parents who would live in the backyard are driving the project. She and her husband are around ninety years old and want to be near their daughter. Though they have been each other’s primary caregivers, the job became too big to handle after a recent health crisis. They now need to live in another way. Though they won't have built-in care and no "service" is being provided, it feels like the right time for them to be near family.

We examined the possibility of enlarging the main house. However, because of sightlines, setbacks and other work already done, it's not possible to add a first floor apartment.

At the moment, the historic barn is used as a garage with a second-floor office. We would put in an accessible bathroom and kitchen in the first floor quarters, where they would able to spend their daytime hours; there's already a bathroom upstairs that we would renovate. We would also add a stair lift, which costs about six to eight thousand dollars. Another daughter might join the family at this property and eventually take over this new unit.

There are a lot of considerations in a case like this. There's what's good for the care of the parents and for the rest of the family. Then there's the long-term financial life of the family. Spending money on home improvements beats paying fees to Assisted Living care when possible and keeps the money in the family.

Most significant is that the proximity can make it possible to maintain the relationship and easier for the caregiver to know what's happening, and the older people are not isolated. Although they sometimes choose to be alone at home, as my mother did, after a while it's not good for them. After all, isolation is used to punish people. It's something I feel strongly about.

To maintain this family bond, I helped them pursue zoning approval. In our area, there are many small towns and each has a different take on what they'll allow. It's difficult to predict the outcome of any particular request, so it takes careful research.

I address all this and more in a series of adult education talks titled "Create Your Own Dream Home Without Leaving Home." It's just as complex when the new unit will be attached to the main house, with zoning requirements concerning allowable size and height, where the entry door can be placed and what the dimensions of the connector can be.

As to who can live there, most times in our area, the person has to be a blood relative or in some way related. What I wonder is whether it's time to have more flexibility to allow for unrelated people to live together. Because, while one group is concerned about property values going down, young people can't afford to buy a home in the town where they grew up. In an area like Fairfield County, Connecticut, the median home price is about four hundred thousand dollars.

Sharing the house in a roommate arrangement, or "homesharing," can make it more affordable. While there are usually not more than three people under one roof for homesharing, there can be four or five, which is where the economics get very good. However, this can be perceived by the neighborhood as a boarding house. This is a common practice on the West Coast and, with some home modifications for privacy, can be very successful.

Although I understand the perspective of the neighborhood and the municipalities, I support flexibility. Detached and attached accessory dwelling units and other options maintain relationships – which benefits the entire community.