When It’s Time: How to Discuss Aging in Place with Parents

Starting the conversation with your parents about where they will live as they get older is hard. Many have a fear of being put in a "rest home." As a member of the Baby Boom generation, I'm right there with you. We weigh our options: What do we need? What do our parents need? What's best for all of us? These are challenging questions to answer.

Most seniors say they prefer aging in place. I recommend my clients think in terms of a twenty-year housing life cycle – a home that will allow you to live an authentic life, feeling safe, connected, and fulfilled for at least that amount of time. Again, not a simple task. I'm deeply interested in helping people make this process as smooth as possible. Before my mother passed away at age ninety-two, I came to terms with how to discuss aging in place options with parents. 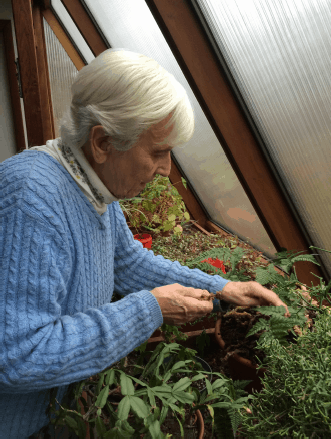 Over the past ten years, I've dealt with my father becoming ill and passing away. Mom (pictured) insisted on staying at home after he was gone. The family never used the words "aging in place," but my sister Cindy and I promised Dad exactly that for our Mom. So I followed the Aging in Place (AIP) guidelines from the National Association of Home Builders to make her Cape Cod home safe for her. For a few years, things went well, but gradually changes in her abilities became evident. As your parent reaches this place in life, be honest. Cindy and I started pointing out things that were happening that Mom wasn't aware of. For example, after Cindy had been staying with Mom for three days, she went to the grocery store and back; Mom thought Cindy was just arriving. We could have played along, but we told her the truth. "We're with you," we said.

Seek support from the community

We reached out to people around her so that they became our eyes and ears. The neighbors and the postman had our phone numbers. Mom's friends from the Huntington Garden Club called and invited her to a luncheon honoring all the founding members. It was nice to see her honored that way, sitting with them and talking about old times. As Mom's memory faded little by little, she loved reminiscing about the past. That evening, she felt connected.

Those opportunities slowly dwindled. She started refusing to go places, her network of friends shrank, loved ones passed away. Fortunately, our cousin and his wife lived next door; they helped out with chores and took her to church. She started saying, "No, I don't want to go to church this time." She'd forget that Cousin Kenny came on Sunday and would complain to us that she had not been to church in weeks. The number of incidents like that showed she was losing the capacity to stay by herself, though she did maintain most of her routines of eating and taking prepared medications.

Cindy said, "What we need is someone to be looking in on her for a couple hours about three days a week – a home care service would come and fix lunches for her and give connection with outside world." Cindy would drive three hours to stay with her the other three days. But there's always a conflict. Mom said, "No, I want to be independent." As she sensed we were leaning toward assisted living, she said, "I want to stay in my home as long as possible. I love my home."

Even as her short-term memory declined, we had wonderful conversations with Mom about the distant past. She also had what we called her Eternal Present, a five-minute window of awareness. When I was with her, we might have a wonderful experience, yet she would forget quickly. We got along for a while with the help of loving people; I continued visiting twice a week but started hiring people to take over the yard chores so I could spend that time with her. Then she had a couple of falls, and the hard reality hit us – we needed to do something fast.

It became impossible for us to be with her enough, and a bit sad, too. I recognized that isolation is used to punish people. Having my mom sit there by herself, even though she said that's what she wanted, was no longer good for her. Her closest friend was her cat.

For the benefit of my mom, we explained the reasons why it was best for her to move to assisted living. Essentially, she needed someone to look after her. "Let's be honest, this is where we are," Cindy told Mom. "We love you and want what's best for you."

So we kept on moving forward. My sister and I were in the same frame of mind – we had decided not to spend any more money on the house than necessary because at some point soon we would have to spend that money on assisted living. The upside was that Mom had amassed a reasonably large nest egg.

We began preparing the home for sale. When we talked to Mom about it, we would be frank about those kinds of things. We felt it made sense that we inform her of the reasons we had to do minor repairs such as fixing up the greenhouse, new trim paint, replacing a few rotted spots on eaves and window sills. We also fixed a leak in the basement and installed a more efficient furnace. Mom got to live in a well-taken care of home, but we made it clear that we were looking to the future. She and Dad had shared that home for many years. She loved it. Coming to grips with the fact that she wouldn't be there forever, that was hard.

Accept aging in place has an expiration date

Next, I arranged for Mom to move to assisted living. She was the first resident of her room in a new wing of a memory care unit. Some residents were in wheelchairs, yet self-propelled and engaging in activities. Through my networking group, I connected with a Senior Investment Advisor and an Elder Care Lawyer. A Senior Move Manager helped us plan the move from a whole house to a single room with a shared bathroom. It takes a good team to manage all the elements.

For her new room, I drew three floor plans for her to review to help her decide to let go of her four-poster bed to make room for her hutch which would hold many of her favorite belongings. I worked with two moving guys. While Cindy took Mom out to breakfast, we moved everything in and set it up in three hours ... like magic.

This experience proved the degree to which adult children can plan for themselves and their family members. I designed around the changes in Mom's life to accommodate her passions and physical needs.

In her new residence, she was safe and physically comfortable, but had difficulty making new connections. We slowly realized that she had no idea that Dottie, her suitemate, was the same person from one day to the next. She could only engage in conversation about what was right in front of her. If a bird flew by, we'd talk about the bird. When the food came, we'd talk about the food. The other residents looked out for her, for which I'm forever grateful.

When it was time to sell Mom's house, there were no maintenance problems to be used as bargaining chips. The young family who purchased it actually liked the 1950s knotty pine kitchen. It went to people who would care for it and we got to use that money for Mom's care, which was the whole idea. The process flowed easily.

When she passed away a year later, it still hit me hard. Fortunately, we had already sold the house. We had gifted, auctioned, and donated all her belongings. We didn't have to deal with all the crises simultaneously. I'm thankful that my sister and I had a well thought out plan.

When I think back, I wonder, would moving Mom out sooner have enriched her life? I'll never know for sure.

Engaging in my mother's experience opened my eyes. A major lesson learned – prepare for the future and change the situation before it becomes a crisis. After what I've been through, I enjoy offering advice to my clients about how to discuss aging in place with parents. I am making needed changes to my own home now.

Keep the money in the family

Typical costs for assisted living are $60,000 per year. A nursing home costs over $100,000. Let's say that by making strategic home modifications, you're able to keep your parents at home for three more years. You could spend $180K investing in the home instead of giving it to a facility to take care of your parent. Would you rather invest that money on their home or on a care facility? It makes sense to ask this question. When I make that point, my clients perk up and say, "I never thought of it that way."

Aging in place is a strategy that often has an expiration date. There's a point at which it's no longer a good thing. The key is to find that balance. Finding that balance takes planning.

From the architect of my family, I've come to be the architect of other families, too. Feel free to reach out to me when you start thinking about how to discuss aging in place with parents, and what that might mean for their future in their home.